Ayandeban prepares and publishes an annual report on Iran future at the beginning of each Iranian year. Our first report entitled “Future Challenges Facing Iran in the Coming Year 1393 (March 2014 – March 2015)” can be reached here in Persian. Below you can read the report abstract in English.

The current study tries to answer the question of “Which Challenges Are the Main Issues Facing Iran in the Next Iranian Year, 1393 (March 2014 – March 2015)”. Different models of macro factor analysis were examined, and 10 macro factors were selected. Several experts and elites were asked to sequentially entitle the 10 factors.

The Outcome of Iran’s Nuclear Program

The main scenarios on the way of Iran’s nuclear program included a spectrum of three basic approaches, détente and agreement, increasing pressure and full-scale or limited war. Since 1392, following a diplomatic spin between Iran and P5+1, we have been witnessing cease of pressure increase and moving towards détente and agreement. Although still there is a possibility of change of approach either by Iran or P5+1, it should be said that because of its advantages for regional or international actors, the iranophobia project will continue as well in 1393.

As we approach the parliamentary elections, political conflicts would be intensified and power quarrels among parties would be more expressed. Examining the indication of dissension between the parliament and the new government shows that the most important statics sign is the continuity and growth of political conflicts between these two institutions.

The optimistic atmosphere reached since the new government came to power, the bazar’s sense of trust in the new government’s economy management team and initial agreement on nuclear program which increased hope for reduction of sanction pressures, makes a relative economic stability in 1393 and a decrease in the growing slope of goods and services prices (inflation). However, Iran’s macroeconomic indicators have not a desirable status and during the next year, according to officials, Iran will grapple with a 25-percent inflation, economic growth of nearly zero and the crises associated with the execution of the second phase of “Targeted Subsidy Reform Plan”.

The indications regarding the famous saying that ‘the future conflicts will be fought over water rather than oil’ were seen all across Iran in 1392. Ministry of Energy and the Department of Environment have made various promises for drought crisis resolution. While Iran has gone into drought era according to experts, implementation of any drought solution scenarios in a region – regardless of the possibilities in terms of economics and desirability in term of environmental issues – have been resisted from people of neighboring provinces, experts, and others involved.

Ethnic, religious and subculture challenges are different dimensions of cultural issues in a diverse form. Regarding ethnicity issue, perhaps the most important quandary of Iran in 1393 would be security potential risks, economic crisis, underdevelopment, and the way of confrontation with ethnic demands. Regarding religiosity issues, different typologies of religiosity are gradually emerging for different reasons, meanwhile, some consider the possibility of secularization of religiosity in Iran’s society. As the subcultures of marginalized groups are facing prohibition and inattention, they will continued their life by various reasons such as globalization, although running more underground, and perhaps, as a matter of this, along with more obstacles and dilemmas.

Air pollution is not just the crisis of Tehran metropolis, but different provinces are suffering from haze, sandstorm and oil pollutions. Petroleum minister has promised that the next year petrol will not be supplied from contaminant petrochemical resources, but others including foreign imports. Head of Iran’s Department of Environment also have repeatedly warned about air pollution of different cities of Iran. However, everyone confirms that the air pollution crisis at least in Tehran and other big cities like Ahwaz is so complicated that wouldn’t be resolve during one year.

Iran’s population policies were changed during last year and official discourse of population growing and childbearing was pursued through different channels such as official media. This came in a period that the statics of marriage per divorce witnesses a 5.2-percent decrease in 10 years and unlike the suppositions, divorce statics in villages have no difference with cities. Marriage and divorce statics in 1393 would be probably a touchstone of performance of official policies for population growing and childbearing.

Patients with psychiatric mental disorders include only 3 percentage of society population, but the 35 percent statics of people who need mental health services indicate that the mental health problem particularly in big cities is a considerable warning. The growth of indicators such as sense of dissatisfaction with life, increased street quarrels and plunge of Iran’s rating in the Global Prosperity Index, reveal that Iran will grapple with these problems in 1393 – regardless of the roots.

In recent years, various political parties and groups have criticized the IRIB (Islamic Republic of Iran Broadcasting) for different reasons, but one of the most important criticisms the institution faced in 1392 returns to antenna auction and breakdown of boundaries between contents and ads, that is pursued without any consideration for vulnerable audiences, particularly children. This policy has faced many critiques. These are happening while IRIB is a bureaucratic and unprofitable organization that feed off annually public budget, having the monopoly of broadcasting in Iran’s geographical borders. Slope of public budget decreased and gradually trust and gratification of audience declined, the next year would be more challenging for IRIB.

Social Capital couldn’t be gained in one night and government cannot inject it into society, like money. The status of Iran has declined in this indicator during the last five years and now it is included among those countries with lowest ratings in social capital index. Similar to economic growth indicators, the hope that this indicator would increase during one year is far from expectation, but if the government and civil institution don’t bring a doubled effort to improve this indicator, the effects will affect all areas such as economic growth or mental health of Iranian citizens. 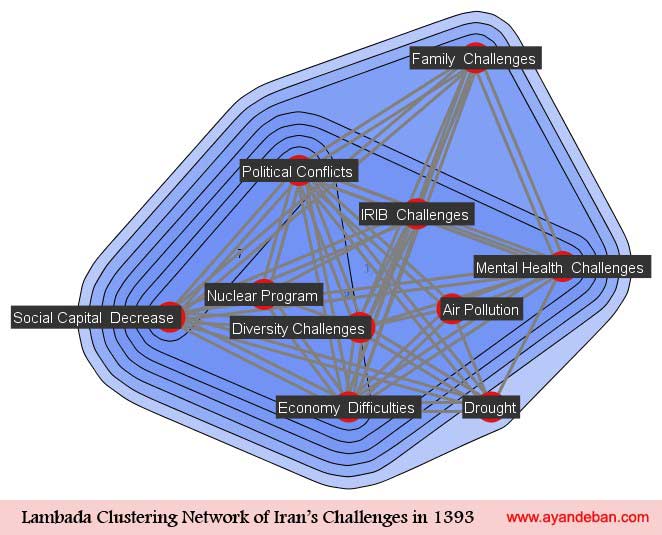 The explained issues are never independent and they can have cross impact on each other. In other words, happening of one issue can influence other issues. This impact were measured by experts over a scales of seldom, very little, little, medium, high, and very high in a 10*10 matrix format. The experts scored the intensity of impacts without their negative or positive directions. After preparing Asymmetric matrix of cross impacts, they were analyzed using the network analysis software, then the graphs associated with them were drawn. The following figure shows one of the final graphs.

When the cross impact was measured, the initial priorities changed. The upper graph which illustrates the whole structure of Iran’s main issues proves this claim. The social capital issue which was identified as a lower priority in experts’ viewpoints is located in the central zone of the network. Vice versa, the outcome of nuclear program, which according to experts’ viewpoints, was the most important issue under the independent recognition of issues, drove to the margin of the network. Using the concepts such as degree centrality, betweenness centrality, closeness centrality, authority and issue clustering, several graphs were illustrated and considerable supplementary findings were obtained. The following table illustrates issues’ ranks and some of network indexes.

This site uses Akismet to reduce spam. Learn how your comment data is processed.

Ayandeban is an independent, non-governmental, non-profit Iranian group focusing on Futures Studies. Our projects and activities are published in Persian and available on www.ayandeban.ir.

In English website we present abstract version of our activities. We also publish some news about Futures Studies around the world.